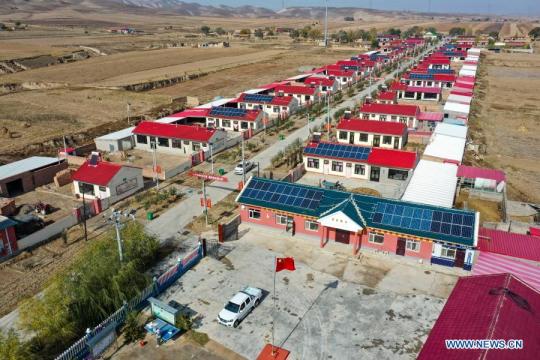 The dream of shaking off poverty coming true for Xihaigu people in the drama has now also become a reality off-screen.

As the Communist Party of China celebrated its 100th birthday last week, China solemnly declared the realization of its first centenary goal of building a moderately prosperous society in all respects, bringing about a historic end to the problem of absolute poverty.

However, it was a hard journey for the nation as a whole to realize the goal.

Over 40 years ago, China put forward building a "Xiaokang society," or a well-off society, in its pursuit of modernization.

It was indeed a bold vision at that time, given the large population living below the poverty line and the country's weak industrial base.

Upholding the principle of "crossing the river by feeling the stones," China rolled out a slew of reform and opening-up measures in almost all aspects of society, aiming to find solutions tailored to practical situations in the country.

The reforms started from the rural sector. Over four decades ago, 18 farmers in Fengyang county, East China's Anhui province, put their fingerprints on a land-contracting agreement that divided communally-owned farmlands for each family to cultivate. This adventurous move broke the egalitarian agricultural system, igniting the vitality of China's rural areas.

After the arduous anti-poverty fight, absolute poverty was successfully eradicated in the world's most populous country with over 1.4 billion people. The final 98.99 million impoverished rural residents living under the current poverty line were lifted out of poverty in the past eight years. All 832 impoverished counties and 128,000 villages were also removed from the poverty list.

China also established the socialist market economy, incorporating a market-oriented approach in policy design and opening its huge market to global investors to share development opportunities with the world.

Foreign investors flocked to China over the years. In 2020, China became the world's largest foreign direct investment (FDI) recipient while global FDI flows plunged due to the COVID-19, data from the Organization for Economic Cooperation and Development showed.

Not to mention that China has become a global manufacturing hub and the only country in the world to have all the industrial categories listed in the United Nations industrial classification. It is also the largest producer of over 220 types of industrial products, including vehicles and computers.

With the targets of "Xiaokang" achieved, China now eyes common prosperity and the achievement of its second centenary goal of building the country into a great modern socialist country in all respects.

Last month, the country issued a guideline on building the coastal Zhejiang Province into a demonstration zone for achieving common prosperity.

"Common prosperity is not only a concept of social development but also social change marked by narrowing the gap between regions, urban and rural areas and in people's incomes," said Yuan Jiajun, Party secretary of Zhejiang.

The country would shorten the income gap and let the fruits of development be shared by all the people, according to a blueprint for the country's social and economic development over the next five to 15 years.